What is DOOH advertising and why does it work? | LURITY Skip to main content 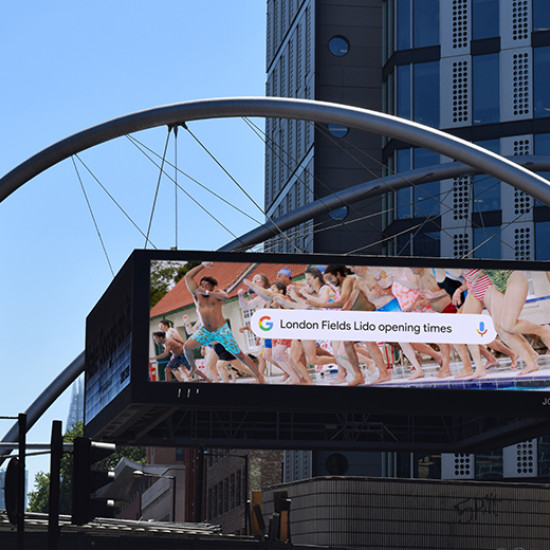 What is DOOH advertising and why does it work?

It’s July in London. If you’ve ever experienced the British Summer, then you know of its unpredictable and fickle weather. It’s Saturday, lunchtime, and the sun is up, a pleasant 25 degrees Celsius. You look up and notice a billboard with a Google search bar filled in with “Next bus to London Fields”, and it gives you a great suggestion - why not spend the sunny day in the park?

You spend a nice afternoon with your friends in the London Fields park, but as the sun slowly begins to retreat, the sky becomes covered in clouds. Just as you pack up your things and get ready to go into the City for a beer on one of the many pub terraces, it begins to rain. As the bus passes the same billboard you saw at lunch, it now displays something different: “Victoria and Albert Museum opening times”, giving you yet another idea on what activities to do despite the unfortunate weather.

Google’s 2019 ‘Make the Most of Summer’ campaign made clever use of Britain’s famously unpredictable summer weather, with digital billboards dynamically switching the displayed content in reaction to the constantly changing conditions. These are just two of hundreds of variations the billboards could display, automatically shifting through its repertoire as the outside environment changed. It was made possible thanks to outdoor advertising spaces that were enhanced with digital technology, part of a new concept known as part of digital out-of-home (DOOH) advertising.

Despite its ubiquity, OOH advertising has dipped in popularity due to its numerous limitations and shortcomings - the lack of interactivity, their relative inflexibility, the difficulty of changing campaigns rapidly and so on. Many of these issues have been addressed by digital, on-screen (in-browser, mobile phone, TV) advertising through its use of novel technologies.

However, what if we applied digital technologies to conventional OOH advertising? Things like digital screens, sensors, smart screens that can be fed weather and time information? With such technology, these outdoor advertising spaces can become lively, reactive and even interactive.

The result is a ‘best of both worlds’ combination that is known as DOOH advertising, which is essentially offline OOH advertising enhanced with digital elements.

The dawn of DOOH advertising

Advertising has, for the vast majority of human history, existed in the public space. From the first sales ad scribbled onto papyrus in ancient Egypt to the beautiful painting-quality posters lining the streets of Victorian England, ads in public spaces were used by marketers to advertise products and services for passers-by.  Billboards, wallscapes, and posters advertised to people who would see these ads while spending time in their vicinity. Their popularity and ubiquity owes to the fact that they are very practical, simple, straightforward and effective. A person simply can’t ignore outdoor advertisements - a study by Nielsen found that 80% of people notice an OOH ad on a weekly basis.

However, as people began spending more time behind screens, whether it was their TVs, phones or PCs, marketers were quick to follow this transition. Technological progression in advertising was largely limited to digital (on-screen) advertising. However, OOH ad space in the form of billboards and posters still offer significant advertising potential - all that they need is a little modernization. Enter DOOH advertising.

DOOH is a new take on classic outdoor advertisements which enhances billboards, posters and signage with new technology, enabling interesting new features such as interactions between the ad and its viewers, remote control of campaigns, real-time bidding for ad time on physical billboards, targeting of audiences and so on.

The transition from OOH to DOOH was inevitable from a business perspective. New technologies that prove their worth are quickly implemented into every industry, and outdoor advertising is no exception.

In many ways, DOOH addresses the problems of OOH advertising while retaining the best features of conventional outdoor ads. After all, there is no ad blocker for the real world, so people cannot ignore DOOH ads like they can with digital ads. As for customer engagement and brand awareness, they are cheaper and more cost-efficient than digital ads. At the same time, marketers can make use of in-browser interfaces to adjust DOOH campaigns.

An interesting ad campaign is an effective ad campaign. People react better to ads that are more relevant to their interests. DOOH ads that can dynamically change in response to their environment are exceptionally powerful; on a hot summer day, you’d be more inclined to buy an ice cream, and an ad may just be the thing that pushes you into that decision. Conversely, on a rainy evening, an ad showing a steaming cup of herbal tea is much more likely to convert viewers into customers.

DOOH can deliver tailor-made ads for a variety of different demographics. If equipped with the right technology, smart screens can recognize who is looking at them and play an ad that is best suited for that particular age group or gender.

Some people may want to find meaning in ads or they want to be able to interact with them in a meaningful way. For instance, an ad campaign that supports natural, unfiltered beauty invites passers-by to upload their own selfie to be displayed on physical screens in public.

Other DOOH ads may offer viewers to send their own messages to be displayed on-screen, for instance, a recent campaign aimed at thanking essential workers during the pandemic allowed people to post their own messages in which they personally thanked others for their work.

OOH advertising is especially powerful when it has a moving image as opposed to a static one. One reason for this is the fact that the human eye has evolved to notice movement. Our eyes are capable of somewhat ignoring images (and thus also ads) that are static, but with movement, this becomes impossible due to the physiology of the human eye.

DOOH shines particularly in ad campaigns that need high visibility. It is also particularly powerful in the ‘last window of influence’, which is a term used to describe the 30 minutes before a customer purchases something. In this case, OOH/DOOH is the medium most seen by consumers according to a recent study.

Ads that need contextual relevance are most effective when displayed in DOOH. This is because unlike static billboards, DOOH can be adjusted remotely to reflect changing temperatures, weather conditions, night/day cycle and other changes in the environment. They can also be changed to play into recent or ongoing events.

So, for whom is DOOH the ideal form of advertising? For anybody looking to increase brand awareness while doing so in a cost-effective manner. For those who want their ads to not just be viewed, but also to be playful, interesting and allow for interaction. For everybody who wants to be a little playful in their advertising and engage with the viewer so that it leaves a lasting impression. DOOH presents an exciting and novel form of outdoor advertising, and you don’t want to miss out being a part of it!

a network of 800 digital outdoor screens in both countries

in the TOP 37 shopping centers

the most frequented places in shopping centers in the Czech Republic, Slovakia. in addition, 566 screens in medical facilities and wellness

our DOOH are a real trigger to the customer's purchasing decision* (OAAA’s Nielsen research, 8/20)